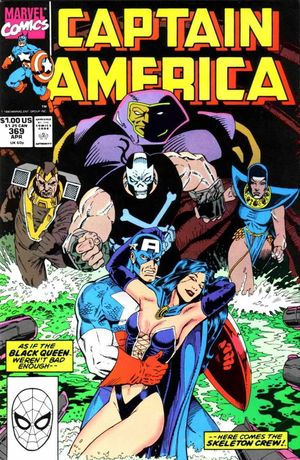 Acts of Vengeance Aftermath (Uncredited) - "The Skeleton Crew" Story by Mark Gruenwald. Art by Ron Lim and Danny Bulanadi. Crossbones, Machinesmith (in the body of the fourth sleeper), Mother Night, and the Voice bust into the Hellfire Club looking for their boss, the Red Skull. The foursome does not find the Red Skull; however, they do find the Black Queen (aka Selene)! The battle in the New York sewer system becomes a three-way affair when Captain America and Diamondback join the fight! Back up story: "Out of his Skull" Story by Mark Gruenwald. Art by Mark Bagley and Don Hudson. Still trapped in his underground prison, the emaciated Red Skull begins to hallucinate.