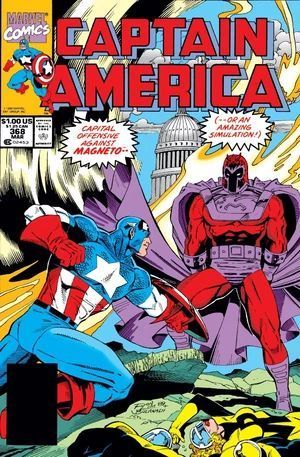 "Red Twilight" Story by Mark Gruenwald. Art by Ron Lim and Danny Bulanadi. Crossbones and Machinesmith are looking for their boss, the Red Skull, and believe that Magneto had something to do with his disappearance. Since the two henchmen cannot find the Skull, Machinesmith decides to create a Magneto-like robot and send it to the Resistants' pro-mutant rally in Washington D.C. to hopefully attract the true Master of Magnetism. The ploy instead attracts the star-spangled avenger! Cameo appearances by the Scarlet Witch and the Hellfire Club's Black Queen. Back up story: "A Clockwork Origin" Story by Mark Gruenwald. Art by Mark Bagley and Don Hudson. The origin of Machinesmith is revealed