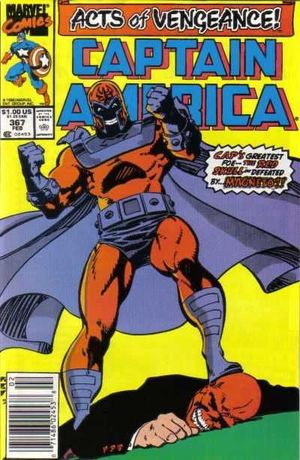 "Acts of Vengeance" crossover with Red Skull, Magneto. "Magnetic Repulsion." Story by Mark Gruenwald. Art by Kieron Dwyer and Danny Bulanadi. Cover by Kieron Dwyer. The Acts of Vengeance storyline brings together for the first time Magneto, a Holocaust survivor, and the Red Skull, the top terror operative of the Third Reich. Payback has been 45 years in the making...and the Master of Magnetism will not wait another day! Also in this issue, Captain America finishes off the Controller. Cameo appearances by Dr. Pym and the Sub-Mariner. Back up story: "The Way of the Snake" Story by Mark Gruenwald. Art by Mark Bagley and Don Hudson. The Cobra triumphs over Mr. Hyde and with his new found confidence changes his name to...King Cobra!