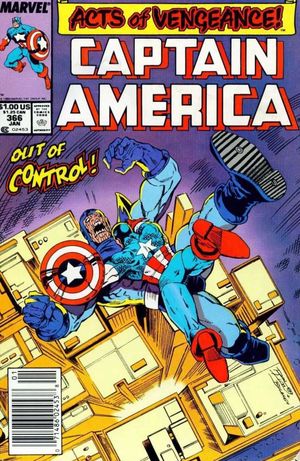 "Acts of Vengeance" crossover. "Remote Control." Story by Mark Gruenwald. Art by Ron Lim and Danny Bulanadi. Captain America takes the unconscious Sub-Mariner to the sub-basements of the former Avengers Mansion, so that Dr. Pym can try to revive him. Next, the star-spangled avenger sets out to find the Controller and even the score! Meanwhile, the Red Skull is plotting against the other super-villains behind the scenes. This issue briefly crosses over with Thor 411 and depicts the ongoing Thor vs. Juggernaut battle. Cameo appearances by Doctor Doom, Kingpin, Magneto, Mandarin, and the Wizard. Back up story: "Nowhere to Hyde!" Story by Mark Gruenwald. Art by Mark Bagley and Don Hudson. The Cobra is still very much afraid of his former partner, but it appears that he may have finally gotten the upper hand on Mr. Hyde.