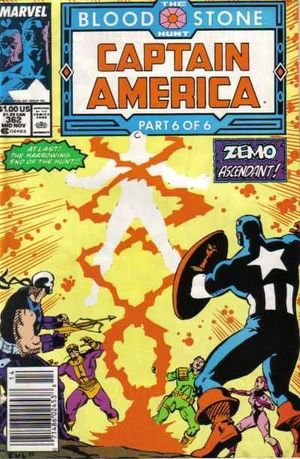 The Bloodstone Hunt, Part 6. "Necromancing the Stone!" Part 6 of 6. Story by Mark Gruenwald and Kieron Dwyer. Art by Kieron Dwyer and Danny Bulanadi. Cover by Kieron Dwyer. The quest for the fifth and final jewel of the bloodstone concludes in Tokyo! All parties including Captain America, Diamondback, Baron Zemo, Batroc, Machete, Zaran, and Crossbones are present for the decisive showdown. What will happen when the five jewel fragments of the Bloodstone are joined together? And why is the corpse of the original Baron Zemo also present? Back up story: "Won't Get Scourged Again" Part 5 of the Night of the Scourge. Story by Mark Gruenwald. Art by Mark Bright and Don Hudson. The Power Broker's failed augmentation attempt has left him at the mercy of Scourge! Only the U.S. Agent and Vagabond stand between Scourge and certain death for Curtiss Jackson.