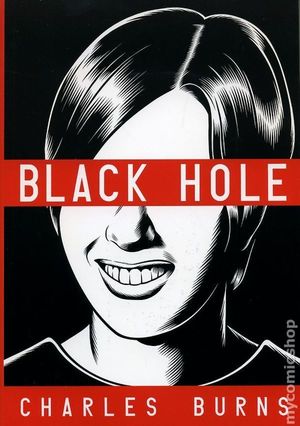 Collects Black Hole (1995-2004 Kitchen Sink/Fantagraphics) #1-12. Story and art by Charles Burns. Suburban Seattle, the mid-1970s. A strange plague has descended upon the area's teenagers, transmitted by sexual contact, that manifests in any number of ways - from the hideously grotesque to the subtle and concealable. What unfolds isn't the expected battle to fight the plague, or bring heightened awareness to it, or even to treat it. Instead, Black Hole paints a fascinating and eerie portrait of the nature of high school alienation itself - the savagery, the cruelty, the relentless anxiety and ennui, the longing for escape. As hypnotically beautiful as it is horrifying, Black Hole deftly explores a specific American cultural moment in flux and the kids who are caught in it. Softcover, B&W. Mature Readers