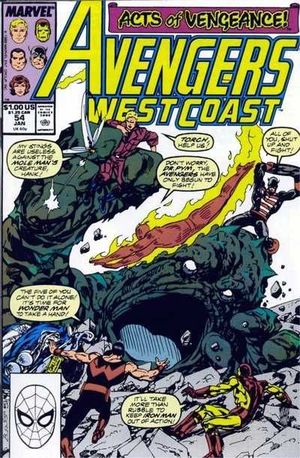 Acts of Vengeance crossover. "The Troubled Earth!" Guest-starring the Golden Age Human Torch. Magneto cameo. Story by John Byrne. Art by John Byrne and Paul Ryan. Story continued from Avengers (1963-1996 1st Series) #312. Now it's time for the Mole Man and the creatures of Monster Island to show the Avengers why he is one of the Fantastic Four's most enduring foes. Plus, the heroes begin to realize that someone is out to destroy the Avengers. Story continues in Avengers (1963-1996 1st Series) #313.