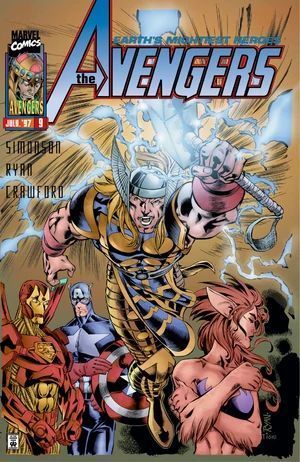 "Shadowbox" Part 2 of 4. Script by Walt Simonson. Pencils by Michael Ryan. Inks by Saleem Crawford and Sal Regla. Cover by Michael Ryan and John Tighe. Earth's Mightiest Heroes make short work of the Masters of Evil outside Avengers Mansion! In fact the heroes' victory was so easy that both Cap and Shell-Head realize something is very wrong with the reality around them! To delve further into the mystery; Ant-Man and the Wasp join Iron Man and Captain America at Avengers Island! Does the secret of this universe lie inside the deactivated nuclear reactor? Meanwhile, Loki is busy gathering allies to battle the Avengers! And his new team includes his mjolnir-wielding half-brother.