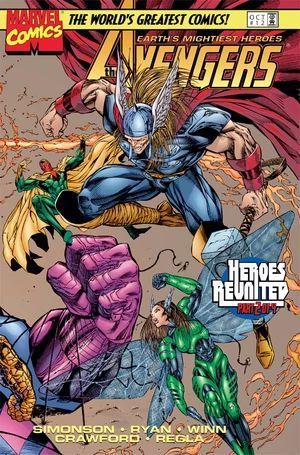 "Shadow's End!" Heroes Reunited Part 2 of 4. Guest-starring the Fantastic Four and the Hulk. Script by Walt Simonson. Pencils by Michael Ryan and Anthony Winn. Inks by Saleem Crawford, Sal Regla, Armando Durruthy, and John Tighe. Cover by Michael Ryan. Story continues from Fantastic Four (2nd series) 12. Doctor Doom bursts into Avengers Mansion and issues a dire warning about the coming of Galactus! The Latverian Monarch says he's already seen the destructive power of Galactus' heralds (via time travel) and urges the Avengers to stop them at all costs! To that end Cap, Shell-Head, Thor, Hawkeye, and the Wasp rush to Hong Kong to battle Terrax! While the Vision and Scarlet Witch join the Hulk in Antarctica to fight Firelord! The FF agrees to help and flies to Moscow to clash with the Silver Surfer! And SHIELD takes on the fourth and final herald, Plasma, in Los Angeles! Can Earth's Mightiest Heroes and their allies defeat all four heralds? And also prevent the installation of Galactus' planet-devouring capacitors? If any or all should fail, Doctor Doom stands ready to go back in time and warn them again!