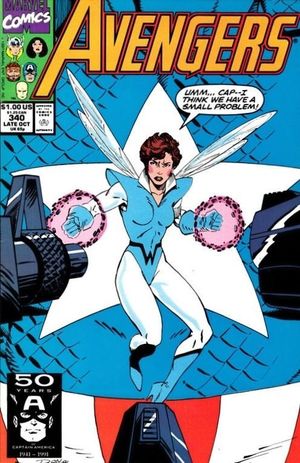 "Clay Soldiers" Plot by David Michelinie. Script by Scott Lobdell. Pencils by Paul Abrams. Inks by R. Jones and Chuck Barnette. Cover by Ron Lim. While running across the street to see Captain America, a distraught woman is hit by a car! The shield-slinger rushes to provide first aid and hears the injured lady's desperate plea for help! Apparently the woman's husband has turned their home into a doomsday fortress! And is using their children as armed guards! Should the Avengers get involved in a high tech domestic dispute? The star-spangled avenger cannot resist! So under the cover of darkness, the Sentinel of Liberty, the winsome Wasp, and Jarvis invade the fortified estate! Who and what will they find inside? Cameo appearances by Hercules, Iron Man, and She-Hulk. Avengers Lineup: Captain America and the Wasp.