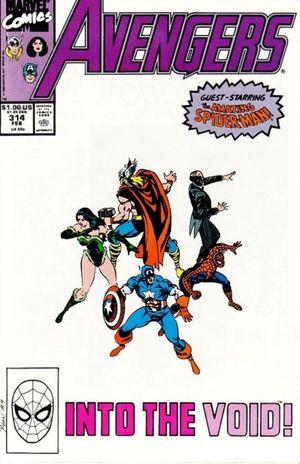 "Along Came a Spider" Part 1 of 2. Guest-starring Spider-Man. Script by John Byrne. Art by Paul Ryan (breakdowns) and Tom Palmer (finishes). Cover by Paul Ryan. What if the universe disappeared for just a split second? That would be frightening! And what if the awesome weapon that could make that possible…fell into the hands of a sinister super-villainess? That would be terrifying! Unfortunately for Earth's Mightiest Heroes…the former and the latter are now both reality! At the Polydyne Industries laboratory in New Jersey, the genocidal Nebula has seized control of Professor Harker's incredible compressor unit! But even Nebula isn't exactly sure what the compressor unit can do! The Avengers fear the worst and ask Sersi and Spider-Man to help them! With Cap, Thor, Sersi, Jarvis, and the wall-crawler gathered in the underground control room, the universe disappears again! But the five heroes still remain! Now what? Cameo appearances by Starfox, Wonder Man, Hank Pym, and the Wasp. Avengers Lineup: Captain America, Iron Man, Sersi, Thor, and the Vision.