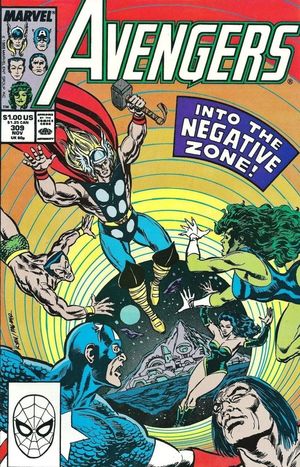 "To Find Olympia!" Guest-starring Sersi. Script by John Byrne. Pencils by Paul Ryan. Inks by Tom Palmer (finishes). Cover by Paul Ryan and Tom Palmer. With the intent of reviving Gilgamesh, the Avengers travel to the mountains of Greece in search of the Eternals' homeland! But shockingly Olympia is gone! Apparently carved right out of the Earth! Wow, were did the city of grandeur go? Nowhere on Earth, but yet somewhere very near Earth! The Negative Zone! Without hesitation the Avengers zoom into the Negative Zone via their quinjet and quickly locate Olympia! However, the ancient city appears deserted and decimated! Who or what has almost destroyed the Eternals' home? Could it have been a bomb-burst? Or perhaps more specifically…a living bomb-burst? Look out! Cameo appearances by the Great Lakes Avengers, Hawkeye, Mockingbird, and Blastaar. Avengers Lineup: Captain America, Gilgamesh, She-Hulk, Thor, and the Sub-Mariner.