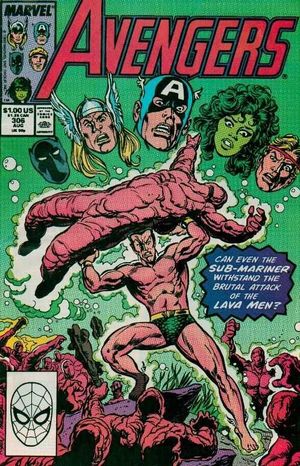 "There is a Fire Down Below" Part 2 of 3. Script by John Byrne. Art by Paul Ryan (breakdowns) and Tom Palmer (finishes). Cover by Paul Ryan and Tom Palmer. While swimming into Upper New York Bay, the Sub-Mariner is ambushed by a legion of Lava Men! However, Prince Namor has plenty of company at the bottom of the bay! Namely his fellow avengers! Trapped within a rocky sphere, the Avengers desperately try to break free before suffocating! Thanks to the Prince of Asgard, Earth's Mightiest Heroes and the Avenging Son escape their undersea prisons! But then they find themselves in the subsurface lair of Jinku…staring at a giant lava monster! Meanwhile as Hydro-Base teeters on the brink of plunging into the bay, Jarvis sends a distress call to the Avengers' west coast branch! Cameo appearance by the West Coast Avengers. Flashback cameo by N'astirh. Avengers Lineup: Black Panther, Captain America, Gilgamesh, Quasar, She-Hulk, Thor, and the Sub-Mariner.