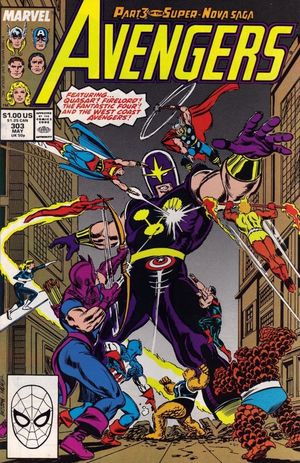 "Reckoning!" Part 3 of 3. Guest-starring Firelord, Quasar, and the Fantastic Four. Plot by Mark Gruenwald. Script by Ralph Macchio. Art by Rich Buckler (breakdowns) and Tom Palmer (finishes). Cover by John Buscema and Tom Palmer. It's an all-out assault on Super-Nova in the heart of the Windy City! The west coast Avengers, Quasar, and the Fantastic Four slug it out with the last Son of Xandar to stop him from destroying Chicago! The enormous Super-Nova has the advantage until Firelord and the east coast Avengers finally return from outer space! After the Human Torch and Firelord siphon off some of Super-Nova's thermal energy; the Thing, Ms. Marvel, and Wonder Man topple the Xandarian giant! And that buys Mr. Fantastic enough time for a quick trip to the Baxter Building to grab the one weapon that could end the fight! Will Reed's risky gamble pay off? The fair citizens of Chicago sure hope so! Avengers Lineup: Captain America, Gilgamesh, Thor, Mr. Fantastic, and the Invisible Woman.