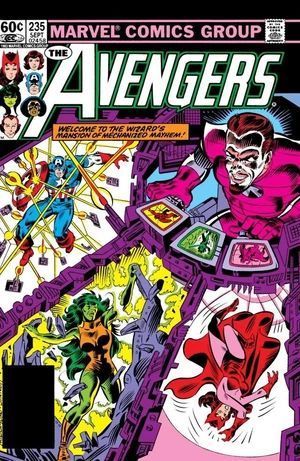 "Havoc on the Homefront!" Script by Roger Stern. Art by Bob Budiansky (breakdowns) and Joe Sinnott (finishes). Cover by Al Milgrom and Joe Sinnott. The Wizard is enjoying life at his Long Island estate after escaping from prison several weeks ago. But now the federal government is on to him! And sends the Avengers to find the former leader of the Frightful Four! Captain America, She-Hulk, and the Scarlet Witch invade the Wizard's mansion to see if the criminal mastermind is home! Don't worry, he is! Can the three avengers reign in the wingless Wizard? First appearance of Raymond Sikorsky. Cameo appearances by Spider-Man and the Vision. Avengers Lineup: Captain America, Captain Marvel, Scarlet Witch, She-Hulk, Starfox, and the Wasp.