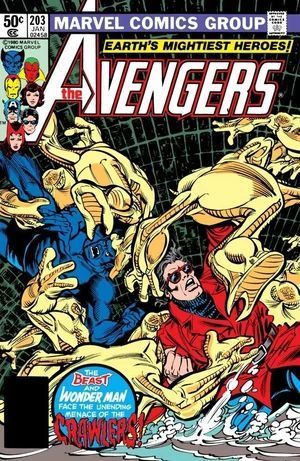 "Night of the Crawlers" Script by David Michelinie. Pencils by Carmine Infantino. Inks by Dan Green. Cover by Carmine Infantino and Dan Green. The Beast and Wonder Man were not around for the Avengers' titanic battle vs. Ultron last issue. Where were they? Somehow Hank McCoy and Simon Williams have become lost on the streets of Manhattan while walking back to Avengers Mansion! Since the two avengers can't make heads or tails of the streets, they descend into the sewer system to find their home on Fifth Avenue and East 70th Street! But there's something creepy and crawly down in the sewers! A very bizarre encounter awaits Wonder Man and the Beast!