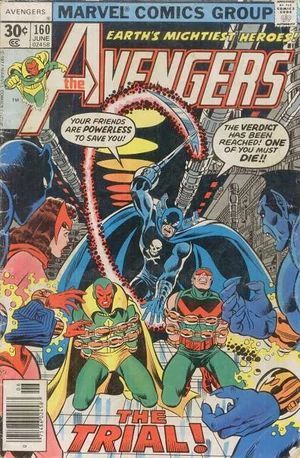 "The Trial! Script by Jim Shooter. Pencils by George Perez. Ink by Pablo Marcos (finishes). Cover by George Perez and Joe Sinnott. One of the classic Avengers issues of the bronze age! Since Wonder Man's shocking resurrection several issues ago, it was only a matter of time before a certain scythe-wielding super-villain showed up at Avengers Mansion. And the Grim Reaper does not disappoint! After Eric Williams ambushes the Avengers, the trial of Wonder Man and the Vision begins! A sensational story! Brief re-telling of the origins of the Vision and Wonder Man. Cameo appearances by Captain America, Iron Man, Thor, Wasp, Whizzer, and Yellowjacket. Flashback cameos by Baron Zemo, the Enchantress, Executioner, original Human Torch, Space Phantom, and Ultron.