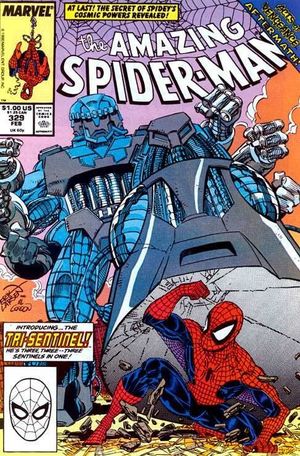 "Power Prey!" Acts of Vengeance aftermath. Script by David Michelinie. Pencils by Erik Larsen. Inks by Andy Mushynsky. Cover by Erik Larsen and Al Gordon. The Acts of Vengeance is over! But Loki, Graviton, and Sebastian Shaw still want another shot at your friendly neighborhood Spider-Man! Inside Shaw Industries, the X-Men's long-time foe tinkers with past and present Sentinel robots! High above the Earth, the Asgardian god of mischief takes notice and decides to push along Shaw's research by merging the prototypes into the Tri-Sentinel! And then Loki sends the gigantic robot to destroy the Amity Point nuclear power plant! Is the end near for New York City? Not quite! In a brilliant flash of light, the Amazing Spider-Man transforms into Captain Universe! And with the enigma force pulsing through his veins, the wondrous wall-crawler charges the Tri-Sentinel! Can the spectacular one prevent a nuclear meltdown in the Big Apple? In Spidey we trust! Cameo appearances by Mary Jane Watson, Flash Thompson, and the Black Cat.