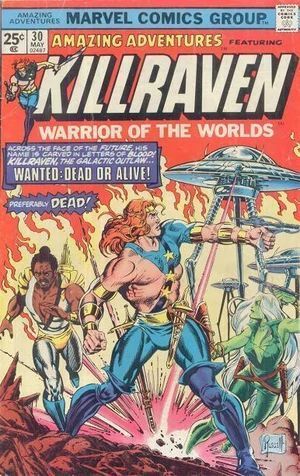 Cover by Craig Russell. "The Rebels of January and Beyond!", script by Don McGregor, pencils by Craig Russell (pages 1-5, 18), inks by Dan Adkins (pages 1-5, 18); April 2019: The High Overlord is called to his Martian superiors in Washington D.C. to provide a report on the battle between him and Killraven back in January; With his report, Overlord provides profiles of Killraven, M'Shulla, and Mint Julep to his superiors; Afterwards, he concludes that while all escaped the battle, the primary concern should be towards Killraven, who's charisma and character could inspire the humans to revolt against their master. Pages 6-17 reprint pages from Amazing Adventures 23-24 with pencils by Herb Trimpe and inks by Frank Chiaramonte and Jack Abel