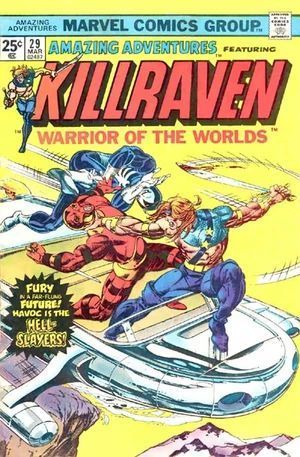 Cover pencils by Gil Kane, inks by Craig Russell. "The Hell Destroyers," script by Don McGregor, art by Craig Russell; Chicago, April 2019; Killraven and his freemen have rescued the pregnant Eve 3,031 from Atalon the Fear Master and the Sacrificer; They leave the Sacrificer's clinic and ride down a pneumatic chute. Killraven uses the Holographic Megaphone to address the other Adams and Eves held prisoner outside Death-Birth, telling them to flee once their cell walls come down; Volcana Ash leaves to find her sister, who is one of the Eves, but Melonie does not recognize her; Adam 3,031 uses the Molecule Disruptor to make the prison disappear; Atalon summons the Death Breeders and tells them to attack the fleeing prisoners, hoping that Killraven will stop to defend them and leave himself open for capture.