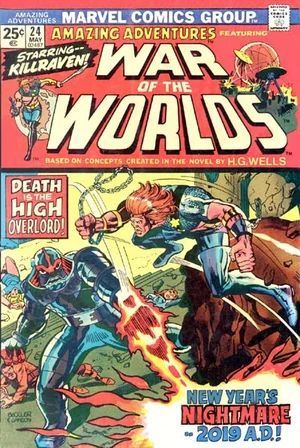 First 25-cent cover price. Cover pencils by Rich Buckler, inks by Klaus Janson. "For He's a Jolly Dead Rebel!", script by Don McGregor, pencils by Herb Trimpe, inks by Jack Abel; Killraven and his band battle the High Overlord on the steps of the Lincoln Memorial. "The Painting," art by Steve Ditko; An art dealer who buys quality paintings at rock-bottom insulting prices from poverty stricken artists and then sells them for thousands attempts to steal a beautiful painting from a gypsy who refuses to sell it; The dealer has the gypsy arrested on a trumped up charge and burgles the man's wagon to remove the painting. Letter to the editor from comic writer Marv Wolfman.