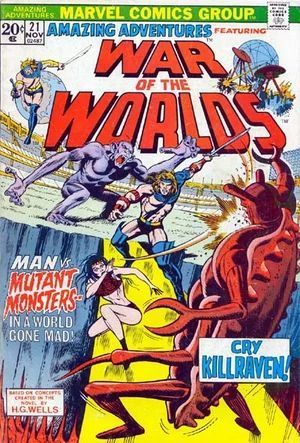 Cover by Herb Trimpe. "The Mutant Slayers!", script by Don McGregor, pencils by Herb Trimpe, inks by Yolande Pijcke; The Warlord and Carmilla Frost, a molecular biologist, watch Killraven fighting off their soldiers in their Alteration Division lab; Frost sends a squad of mutants into the fray, but they fare little better; Warlord steps in and brings Killraven down with a metal fist; Doctors operate on Killraven with a laser scalpel.