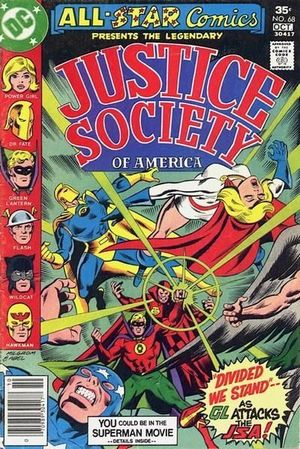 Cover pencils by Al Milgrom, inks by Jack Abel. Divided We Stand! starring the Justice Society of America, script by Paul Levitz, pencils by Joe Staton, inks by Bob Layton; The Psycho Pirate still has Green Lantern [Alan Scott] under his spell and later enchants the Flash [Jay Garrick] as the rest of the JSA try to stop him at his Earth-1 hidden headquarters; He is defeated by Wildcat's punch, who was unaffected by his fear gaze; Meanwhile, Bruce Wayne plans to arrest the JSA as he calls in for some heavy backup while the JSAers are still on Earth-1 in the JLA satellite.